This section was written by Phil Nemy, with contributions by Martin Cuff and Mary Cruse.
Here is a visual graphic to help you understand the production process:

(Click into the hyperlink to enlarge the image below. Click on the back button in the upper left corner of the image page to return to the lesson.) 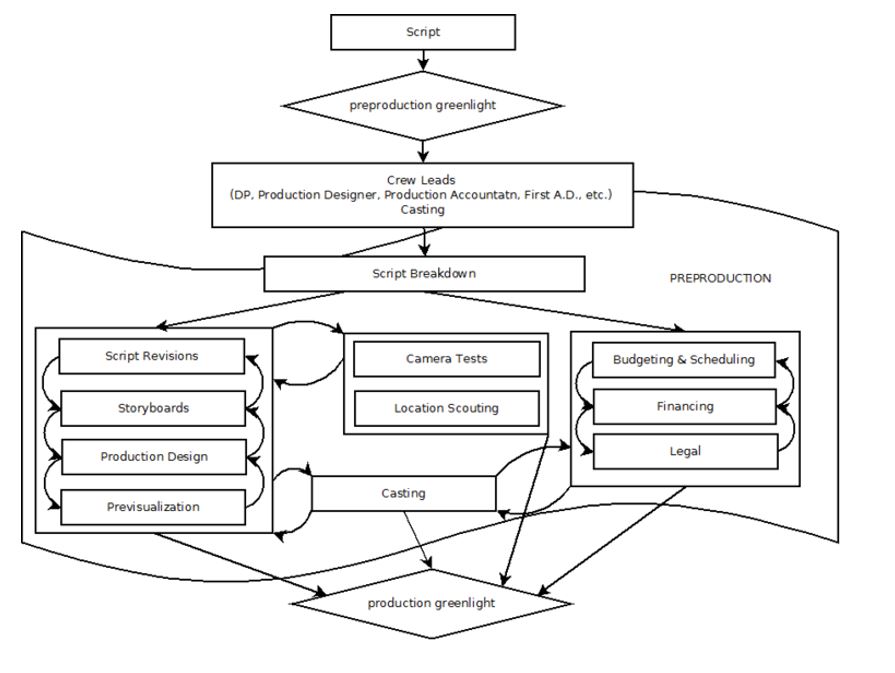 Beginnings (Development & Pre-production) refer to the planning phase of a production. This starts right at the beginning of the process and includes screenwriting and film financing. It involves finding the location, planning and scheduling the shoots, budgeting and employing casting and crewing agents.

Production (Principal Photography, Animation and Digital VFX and Post-production) includes pre-and post-production as well as activities related to film financing. These activities can generally be described as the activities required to produce one copy – or in industry terms, one NEGATIVE – of the movie. Production is the actual action of filming, where the disparate parts are brought together and elements are ‘manufactured’. Post-production refers to the editing process where the production is edited, and special effects and sound are added. If the film has been shot on film it may be transferred to video at this stage. The term ‘long form’ refers to feature films and ‘short form’ refers to commercials.

Circulation (Distribution) refers to the activities around buying and selling the print.

Delivery (Exhibition/Broadcast) refers to how the film is packaged into various channels or streams of distribution (e.g. Cinema, Pay-per-View, DVD sales, VOD.)

Consumption (Exhibition) refers to the manner and level with which audiences / consumers take up the product via its various channels.

Today, the major studios (‘the big six’) generally operate as financial backers and distributors of films whose actual production is for the most part conducted by independent companies—either established or temporarily created for the production of a specific film. Many of these studios’ specialty divisions will obtain distribution rights to films though the studio has had no prior involvement. The big six are primarily focused on the areas of development, financing, marketing, and merchandising. These major movie studios are contrasted with smaller movie production and/or distribution companies, which are known as independents or ‘indies’. The ‘mini-majors’ listed above are comprised of the largest indies in the film business.

Login
Accessing this course requires a login. Please enter your credentials below!
Lost Your Password?